I have learned, while travelling in India, that to show respect when visiting a Hindu temple is to walk around it in clockwise direction. I have adopted this approach in few of my big trips, when moving around a country, countries or an area in precisely such manner. So, as my time in London, a place that has been my temple for nearly thirteen years, started slowly but surely to conclude, it became clear how I will show this city my gratitude. I will walk around it in clockwise direction. As I started to research this walk, a good hiking friend of mine told me about a path that is already in place and fulfils this purpose perfectly.

It’s called Loop or London Outer Orbital Path. It’s a signposted 242 km long path through woods, parks and villages on the outskirts of London that was commissioned at the end of last century and became fully walkable in 2001. The path is divided into 24 easily walkable sections, start and end of each is accessible by public transport. I wanted slightly more of a challenge, so I combined every two sections end ended up with twelve walks, between 15 and 32 km each. One for every month of this year.

The first walk couldn’t be more enjoyable as it took place on a glorious sunny Saturday, first one of the new year. I left home at dawn under gorgeous crimson skies that were promising a good weather. Bus took me to Lewisham first where I changed for a train to Erith in the county of Kent, the start of my walk. Short stroll from the station led me to the riverside, passing the somewhat famous Cross Keys pub. The pub has been closed down in summer of 2010 after reportedly more than 100 travellers descended on it and five of them simply rode their horses through the establishment to the bar, demanding a drink. Apparently, this wasn’t the first time horses were ridden through the pub or ruckus, which included ponies and traps races, was caused outside of the pub. It was the last time, though, as after the incident local council finally decided to revoke the pub’s license, reasoning the landlord lost control of the situation.

No such shenanigans were happening during my visit. The place was empty and calm as I was approaching the so called Erith Pier (properly Deep Wharf), which used to be a place to discharge cargo, but nowadays it is a pedestrian zone and public space. Towards the east flooded with strong rising winter sun I could see a towering white wind turbine, still a curious sight around London. Looking north, across the river Thames, my view was taken over by naturally looking rolling green downs, which in fact are grassed-over heaps of rubbish. This is where Loop ends and where I myself should finish this adventure in December, closing the loop.

The first part of this day followed three rivers. Once I got out of Erith and left its industrial area with the wind turbine behind me, I continued past the aforementioned great London river Thames for a little while. The space opened up and almost resembled a countryside as long as one decided to ignore the metal-crunching industries to my right. On the tip of this area, where I would soon turn right and follow up the second river, Darent, a gaunt, skeletal tower that supports a radar installation of the Port of London Authority was rising. What is more interesting is that I was walking on a part of Crayford march known locally as the ‘Saltings’, that contains one of the last significant pieces of saltmarsh along the inner Thames estuary. Besides a unique habitat for wildlife with special character and history, a part of fossilised ancient forest dating back to the late Neolithic (up to 5000 years ago) can be seen buried within the mud of Erith Saltings at low tides. A total of 15 different trees and shrubs have been identified, including alder, yew, ash, oak, holly and elm.

The industry took over the views once more as my route started to turn south. Right next to me was the Darent Barrier, or Dartfort Creek (as the river Darent is called here) Tidal Barrier. Constructed in the late 1970s as part of London’s flood defences, the barrier’s two large steel gates, weighting over 160 tonnes each, are lowered at times of high tide in the River Thames to prevent flooding of upstream hinterland of Dartford and Crayford. Much further in the distance, but not least majestic, the Queen Elizabeth II Bridge could be seen, glistening in the sun. Opened in 1991, the QE2 Bridge carries the M25 across the River Thames. The main span is 450 meters wide and at the time of construction was one of the longest cable-stayed spans in the world.

The last and undoubtedly the prettiest tributary I followed for a while was the River Cray, which rises from springs in Orpington and gives its name to a family of settlements hereabouts, most obviously to Crayford through which I was just traversing. The river also supports, via the Thames Road Wetland closer to the junction with Darent and throughout the rest of the Cray Riverway, important habitats for birds, plants, fish and also dragonflies and reptiles. Now and then I would take a little detour from the riverway. One of those was to visit the nearby Hall Place House with its cute little greenhouse and gardens that date back to Tudor times when the house was built. The greenhouse displays some colourful plants from semitropical countries, most noticeably the distinctive petals of Bird of Paradise flowers (Strelitzia Reginae) that were in full bloom when I visited. The house also has a little café, which provided a welcome hot beverage and snack stop around the halfway mark.

After I returned to the path, I first had to endure the city creeping back again temporarily, as it was necessary to cross the incredibly busy and noisy dual carriageway A2 connecting London to Dover. I could hear the traffic for quite some time as I continued through Churchfield Wood towards Bexley, passing an old cemetery with a demonically looking black cat basking in the sun and the nearby church of St. Mary the Virgin. I rushed by the village almost missing the only sight of importance in this place, the home of John Thorpe, the 18th-century Kentish historian who in 1771 rightly opposed an opinion that the cherry is not indigenous to England.

Finally, I have left the village of Bexley and rejoined the River Cray. Back in the nature at last. And very fine nature too as I have commenced the second, way more enjoyable part of the day’s walk, by entering the beautiful local nature reserve of Foots Cray Meadows. The path followed the river and its pristinely clear waters closely for the next few miles, sometimes so close that it was impossible to continue across the muddy riverbanks and it was needed to find a slight detour. At one point I even had to navigate through a sliced up tree trunk as I found myself in the most wilderness-like setting of the day. The space eventually opened and I could see I am approaching very pretty Five Arch Bridge, a listed building.

Another historic building appeared as I eventually left the meadows and reached Sidcup Place, a building that was originally designed in the shape of a “star fort with bastions”. I didn’t explore the architecture or linger around much, besides taking photo of a quirky looking Loop waymarker at the edge of the park. I guess I must have felt some woods are near. After a short walk and navigating through another maze of a crossing, under and over the roaring A20, I finally slipped right into Scadbury Park and very much enjoyed the rest of the walk as for the next 4,5 km the Loop traverses parks and woodlands.

Scadbury Park is another local nature reserve and much of it is a working farm. It’s also over 300 acres of ancient and wet valley woodland with several veterans trees scattered about. Many of the oak trees at Scadbury were pollarded – cut above the reach of grazing deer – and grown for timber sold for shipbuilding as well as for building houses and making furniture. Some of the remaining oak trees are more than 400 years old. Amazing orchards in this park. Also a place called Scadbury Manor, a moated house that existed there from the Middle Ages and was substantially rebuilt in the Tudor period. A mansion was built on the island, with a gatehouse and walled garden all in brick with cobbled courtyards. The most famous residents were members of the rich and powerful Walsingham family originating from Norfolk. Sir Edmund Walsingham was Henry VIII’s Lieutenant of the Tower of London responsible for prisoners including Sir Thomas Moore, Thomas Cromwell and Anne Boleyn. Besides, the place might be haunted by its previous inhabitants and is of some interest to paranormal investigators.

The final stretch took me via Park Wood into Petts Wood, which is the name of both this group of ancient woodlands and the suburbs ahead – the Petts were the family of 16th-century shipbuilders, who sourced their timber there. The very last bit of the walk, before I left the path for few weeks and diverted towards the Petts Wood train station, is nothing short of trainspotters’ paradise. The path crosses in short order over a series of railway lines, all carrying commuter trains to and from London. One of the bridges was occupied by a large group of children who excitedly waved and yelled at each passing train and each passing train responded back with a sound of a loud horn, making the bunch of kids scream with joy. It felt like a common pastime in this neck of the Petts Wood. Soon, one of those trains was carrying my tired body back home, just in time as the short winter day outside was expiring into the dusk, both the day and myself fully exhausted.

I learned a lot about these outskirts of London on my first walk. But when I was later reminiscing about the day’s occurrences, what stuck was the interaction with fellow humans. I patiently greeted almost every single person I met on the path, obviously outside of the more populated villages and city centres, and I observed my angry inner reaction to the roughly half of those people who didn’t respond to my “Hello”. At one stage I felt like I just don’t want to bother greeting anyone at all, facing such (un)success rate. But in the end I said to myself – what the heck – it doesn’t really matter if the person replies to me or not. What matters and what I have control over is that I greet them. So I will continue doing that as I continue walking on this path this year. With a smile. 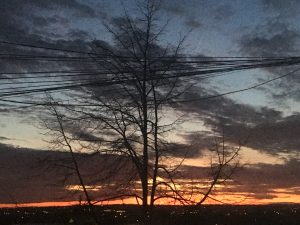 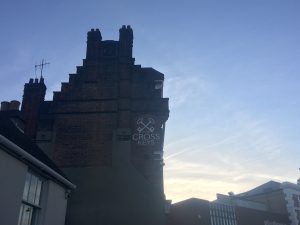 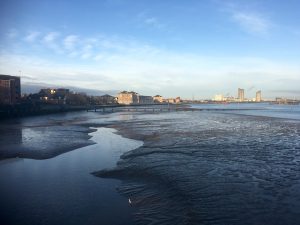 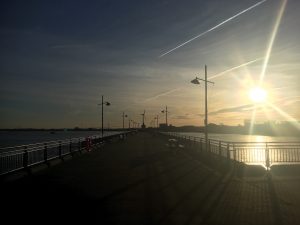 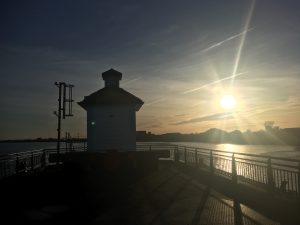 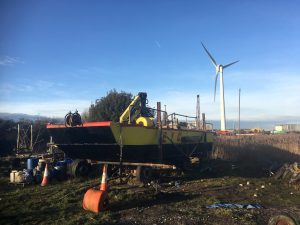 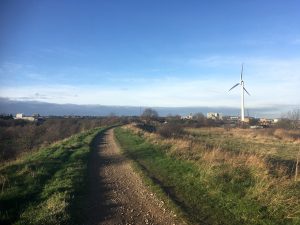 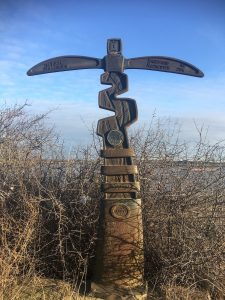 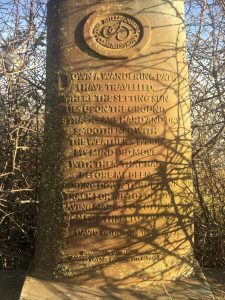 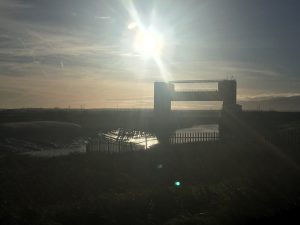 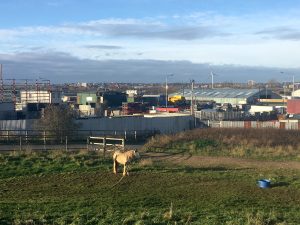 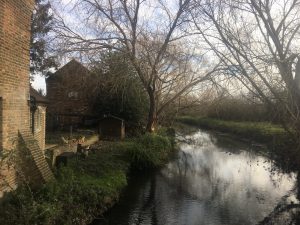 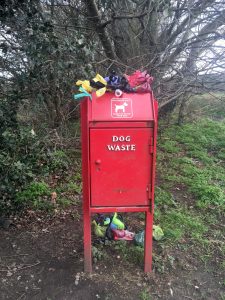 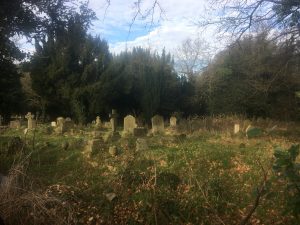 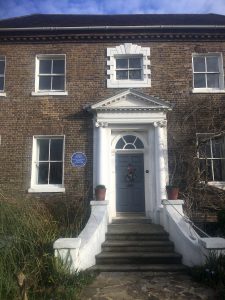 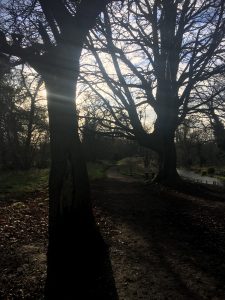 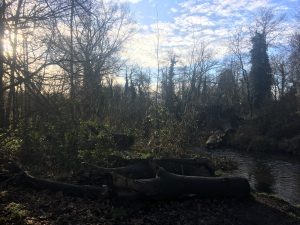 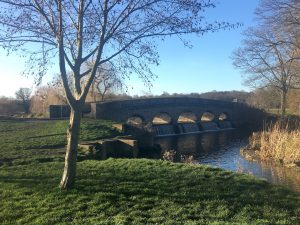 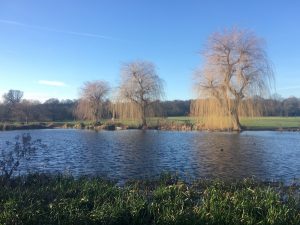 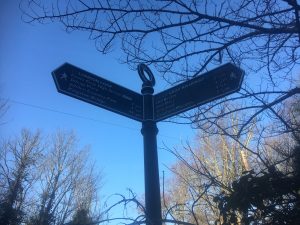 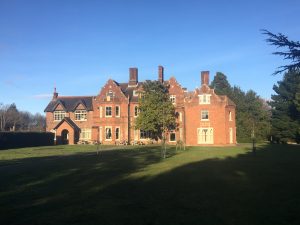 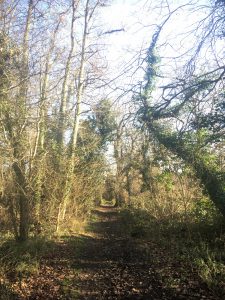 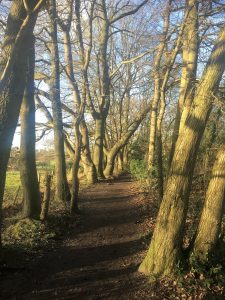 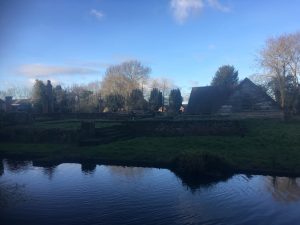 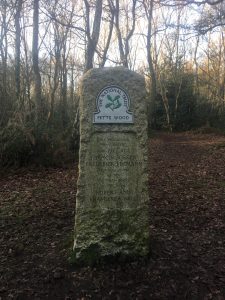 Notes from the Darkness Retreat